Now Reading: A Report On Kyle’s 1st Day of School.

A Report On Kyle’s 1st Day of School.

First day of school for Kyle is in the books.  This is the equivalent of 6th grade for him I guess. 🙂
I went with wifey to drop him off this morning.
Today’s school day consisted of a small seizure in the car on the drive to school.  And then in the classroom as we were overwhelming the teacher & staff 🙂 with info on his seizures and how to use the VNS magnet, almost on cue, he had 3 small seizures within the first 10 minutes he was there.
🙁
When I texted wifey after school to see how the rest of his school day went she said he had a 90 minute nap at school  (because of the seizures) but he was smiling when she picked him up.
That’s pretty much how an average day during the summer school went but it sucks when it happens on day one.
I got home from work about 6:15pm and of course he had plenty of energy and was climbing all over the couch when I got home. 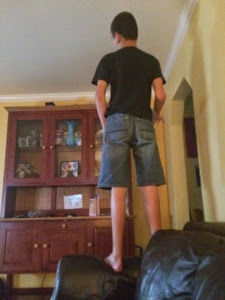 I said to him…
“Dude why don’t you have all that energy during the school day and show them your true self and then take a 90 minute nap when you get home from school and give mommy a break?”
I’m not sure he understood me.
🙂
The other new thing we have to stress about lately is that the king’s appetite has been crappy the last few weeks coinciding with a new med and a med tweak / change.
He ate none of his lunch at school today.
We’ve had lots of feeding issues over the years with Kyle. Lots of weight loss and force feeding were in our past.
We haven’t seen his appetite this low in a few years… since before he went on the med depakote for his seizures.
Depakote has weight gain as a side effect which in the king’s case we welcomed with open arms.
But now his appetite is back down to pre depakote levels.
Anyway I just force fed him his dinner.
And that process back lots of bad memories.
Again it’s only been bad for a week or so. Hopefully it’s just a temporary phase and his appetite will be back very soon.
Otherwise we are probably only a few weeks away from wifey spoon feeding him butter to get the pounds back on.
🙂
I’m only half kidding.
So not the greatest first day of school to report unfortunately.
But what can we do?
It is what it is.
And behaviorally he seemed fine and happy when he wasn’t napping.
And as wifey said on the drive home from dropping off this morning…
“Let’s not freak our yet. It’s only day 1 of 180”
🙂
That’s it. The end.

8 People Replies to “A Report On Kyle’s 1st Day of School.”