Now Reading: A Perfect Example of the Yin & Yang of Our Autism & Epilepsy Lives

A Report On Kyle's 1st Day of School.

Ipad Survival/Sanity Tricks for Autism Parents: You Can Lock The Screen!!

This should be a quick one I promise.

Wifey signed Kyle up for some speech therapy offered at a local college.
12 sessions after school, 1 per week, 1 hour long, at a good price because they are students studying to be speech pathologists.
Today, after school was his first session.
Wifey and I had the following text exchange at about 3pm.

So all afternoon I was riding high.  This was awesome stuff!
And I couldn’t wait to hear the rest of the stories when I got home.
I texted wifey at 5:55pm to say I’ll be leaving in a few and I get no response.
I texted her again at 6:05 to say that I’m walking to my car should be home at 645.
No response.
When I get home I find the king asleep on the couch 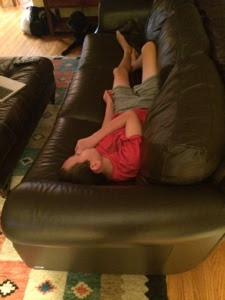 with wifey sitting right next to him.
HER: “He had a seizure.”
ME:  “Damn!  A big one?”
HER: “I don’t know. He was in his playroom and I could hear that weird humming sound that he sometimes makes. By the time I got to him it was over. And he fell asleep a few minutes later.
ME:  “Any naps or seizures at school today?”
HER:  “A 20 minute nap. Then he got up but he has small seizure and had another hour nap.”
ME:  “Damnit!”
HER:  “They said when he was awake he had a fine day.”
ME:  “How do we break this pattern?
How was the rest of the speech therapy?”
HER:  “Fine. But by the end of the hour he was DONE. But he only tried to hit her once…”
That’s pretty much it. That’s the Yin and Yang of our day today.
By the way the positives from that speech session today are pretty HUGE!  That’s not lost on me here. It just sucks that you can’t bask in the glow sometimes…
youknowwhatimean?
It seems like we can’t have a couple positives without a couple of negatives.
That’s just the way the world works I guess.
Or at least the way our world works…
I just need to accept it…
Yin & Yang baby, Yin & Yang!
🙂
THE END.
Over  & Out.
I told you it was a quick one.