Now Reading: This Year’s Vacation: Ahhh, Only Autism & Epilepsy To Worry About…

Our Lake Vacation: A Day 3 Recap

This Year’s Vacation: Ahhh, Only Autism & Epilepsy To Worry About… 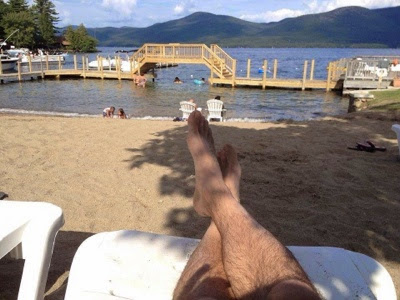 We go on vacation every summer.  Kyle has extended school year (ESY) every summer and it usually lets out in mid-August and we go away the very next day.

We go to a Lake town in upstate NY and spend a week away.
We’ve been going every year since he was a baby.And today is the day. This year we are staying for 10 days!  It is Wednesday at 6:58am and we’ll leave for our vacation as soon as wifey & the king wake up.., and as soon as the heavy rain passes.
It is about a 4 hour drive. And it’s supposed to rain all day today. In fact the weather forecast looks pretty shitty for the first 4 days of our trip.
And don’t tell wifey but I gotta admit that the weather forecast is freaking me out quite a bit. The idea of being stuck in the room/cabin for long stretches of the days with Kyle bouncing off the walls while it pours outside is stressing me out.
And then it dawned on me.  I thought to myself…
“Ahhhn getting stressed about the weather….isn’t that a fun, normal, thing to get stressed about… I’m worried about how Mr. Autism will handle the rainy days…  That’s nothing compared to the stuff that we’ve had to stress about in the past while on vacation.”
And just now as I’m writing this Kyle had a small, short seizure in his sleep. And I thought about that and strarted stressing about how his seizure activity might be affected while on vacation…
And then I thought….
“You are lucky this year. You only have autism & epilepsy to worry about while on vacation…”
And as crazy as that sounds. It’s totally true.
In fact last year on our drive upstate wifey said “it’s like we show up to the lake with a different kid every summer” and it really is true.
For example, in the real old days, in 2009BM (Before Melatonin), we had a kid that would get up at the crack of dawn and stay up really late and couldn’t stand being in our room/cabin.  So he would have us out all day long.  We’d be at breakfast as the restaurant was opening up.  And we’d have to drive around for an hour at night to get him to sleep in the car before carefully transporting him to the room.But that’s a silly example…

What this blog post is really about is how for as long as I’ve had this blog (since 2011), every August we’ve been heading off on vacation, with a somewhat major crisis with Kyle hanging over our heads or looming off in the distance in the weeks after our trip.  And how we would all still enjoy our trip immensely, and be sad to go home, and we look back at pics and think back upon those vacations fondly…but in reality we were vacationing thru some real stressful times…

In 2011, Kyle was smack dab in the middle of his “summer of rage” and was prone to many meltdowns, (sometimes violent) per day.  And we had to plan every day and every activity with an escape plan in place.  It was a rough week.  Plus while we were on vacation wifey was making frantic phone calls to our school district and fighting to make sure he had a school to go to in September.  (which in turns out he didn’t…2 weeks, no school, lawyers involved…yada yada yada).

Anyway, all in all we had a pretty darn good trip that year, lots of happy pics to share on FB, but thinking back it was a pretty stressful time.

In 2012, we went away 3 months after Kyle had his first seizure.  So epilepsy was new to us and I was always on edge.  And while on vacation he started having these weird quick dizzy spells where he would fall backwards (we found out in October that these were “drop seizures”).  Also while on vacation that year we discovered a large lump on one of Kyle’s testicles.  While on vacation we had conversations with his pediatrician who said it sounds like a hernia.  And that’s what it was.  And he had hernia surgery in September of that year.

Anyway, all in all we had a real good trip that year,  my mom even came up for a few days & joined us, lots of happy pics on FB, …but thinking back it was a pretty stressful time.

Then last year in 2013, we hit the trifecta, we had 3 things to stress about last August when we went away.
(1) Kyle had the return of the mysterious right leg limp, and was happily limping quite badly throughout our trip and we had a doctor misdiagnose it the day before our trip which truly freaked us out.
(2) Kyle was slowly going up on a new seizure med, while slowly coming off another seizure med and was sleeping like crazy and when he was awake he went thru stretches throughout the day where he was zombie like. All these meds were controlling the seizures but we didn’t like the Kyle they left behind. (In fact while on the trip that year we called his neurologist and said “this is pathetic. we are gonna pull him off one of the meds asap. we’d rather have our kid back and risk bringing on more seizures…”

(3) we also had a surgery date scheduled for Kyle’s VNS Surgery set for 2 days after we returned home from the lake. And I was truly stressed & freaking out about the surgery.
Anyway, all in all we again had a real good trip last year,  my inlaws came up for the week & joined us, lots of happy pics on FB, …but thinking back it was an extremely stressful time.
This year?
I’m worried about the weather!?  I’m worried about how to keep my autistic son busy on rainy days!?  I’m worried about a few seizures here and there?!
What a blessing to only be stressed about things related to autism & epilepsy. And even more mundane things like the weather or getting stressed about work in the days leading up to the trip…
That’s stuff is nothing!  I can handle that stuff with my eyes closed.
What a blessing it is not to have a crisis hanging over our heads…  Autism stims I can handle. Meltdowns in restaraunts I expect. Eating sand on the beach is par for the course.  Seizures and naps caused by bigger seizures really suck but we can deal with.
This August just having our wide awake, mostly happy, bouncing off the walls, non limping, healthy (that’s right I said healthy!) autistic & epeliptic son  on vacation is something to be treasured.
And I need to celebrate that this year that I have the LUXURY of being stressed about the little things. The little things that typical parents worry about before leaving on a 10 day vacation….
The weather, money, work, and oh yeah, autism & epilepsy.
Well that’s all I got. Time to check the weather forecast AGAIN and then go pack up the minivan.
BYE!
Autism Daddy Over & Out!

7 People Replies to “This Year’s Vacation: Ahhh, Only Autism & Epilepsy To Worry About…”