This Year's Vacation: Ahhh, Only Autism & Epilepsy To Worry About...

Our Lake Vacation: A Day 3 Recap

So it’s Saturday morning 8:40am. We are on day 4 of our upstate NY lake vacation.

I am feeding his majesty breakfast in our room/cabin/cottage/ apartment. 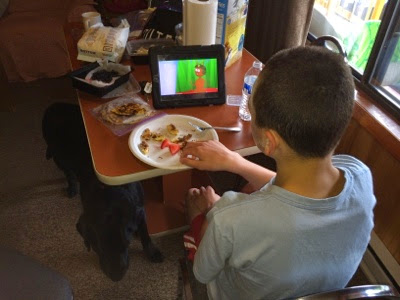 Wifey is in the village  taking a power walk around the lake. We are taking turns getting our exercise in. Yoga for her Thur morning, a run for me on Fri morning, her power walk this morning, another run for me tomorrow.
So wifey’s family has come up to the Lake to join us for a few days. Her folks, and 2 of her sibs and their families and her cousin & his wife. All in there’s 15 of us.
We arrived Wednesday evening.
Most of them arrived Friday morning and will be here til Mon / Tues.
We are all staying in separate rooms and we all do our own thing but usually see each other down at the lake midday and then again around dinner time.
Kyle seemed really happy to see everyone… especially my father in law, his Peepa.
He loves his Peepa…violently. He loves his Peepa… obsessively.  As wifey says “he loves the crap out of him…”
Anyway we had a nice day by the lake even through the weather was COLD. Kyle was happy to be with everyone.
And he even jumped off the dock again this year which forced me to go in too. It was f&$king freezing!
And in the room / cabin he’s been an angel. Happily sitting around watching his iPad while wifey & I shower & putter around.
He’s still holding his breath WAY too much and he’s still having WAY too many little seizures throughout the day (that we think the breath holding may be triggering some) but all in all he’s been very content.
I think he likes the 3 of us being confined to a very small, 2 bedroom cottage. I think he likes the togetherness of small apartment living where we are all on top of each other (not that our house at home is huge).
I miss apartment living too since I’m not a handy guy… but he’s too noisy for us to be anybody’s tenants ever again.
🙂
So the first 2 days were a delight, very calm and relaxing for the king and therefore for wifey & me….
Until last night.
The 15 of us went out to a steak house for dinner at 6pm.
Kyle sat at the head of the table (with autism service doggie Paula at his feet). Unfortunately for Kyle the head of the table was very far away from his Peepa.
He was ok for the first 75 minutes of our meal. He wasn’t very present/ a little zombie like but he was doing ok eating bread & mozzarella sticks while watching his iPad.
But the later it got and the longer we were there and the closer it got to his usual bedtime the more “rambunctious” he got.
By rambunctious I mean hitting wifey & me.
Hard & often.
Somehow we both kept our cool and kept on finishing our meals…
even though inside I was seething.
It’s hard not to get angry or react when you’re getting hit on the arm & across the face.
But when the rest of the family starting looking at the desert menus we decided it was time to get the hell out of there.
Autism Parents never have time for desert, right?
🙂
I gave him his evening meds & his melatonin in the restaurant parking lot and raced back to our room dodging slaps, books, and a full soda can (!) that Kyle threw at us from the back seat.
As soon as we got back in the room I put him in his pj’s and closed his light and he was asleep in under 10 minutes.
So so far only one real bad 90 minute stretch in the 65 hours that we’ve been here is not bad at all…in fact it is awesome!
but I gotta admit that it takes me a while to recover from a 90 minute stretch like that.
For example this morning so far he’s being pretty good but my nerves are shot and I’m on edge.
But I have a good feeling about today… I really do… I keep telling myself…over & over…
I guess i just need to restart my internal HOURS WITHOUT AN AUTISM INCIDENT clock over and I need to go jump in the freezing cold lake as soon as wifey gets back from her walk to SHOCK that bad 90 minutes out of my system.
That’s what I’m gonna do…putting on my bathing suit now…
🙂
THE END. OVER AND OUT.

8 People Replies to “Our Lake Vacation: A Day 3 Recap”