Is He Just Being a Jerk? Or Did He Have a Seizure?

We had a perfect Saturday yesterday.

It started out with wifey & I being selfish and doing our own things.
She went to a 90 minute yoga class at 9am while I stayed home with Kyle.
Then at about noon I went out for a 75 minute,  7.5 mile run on a nice trail kinda near my house. 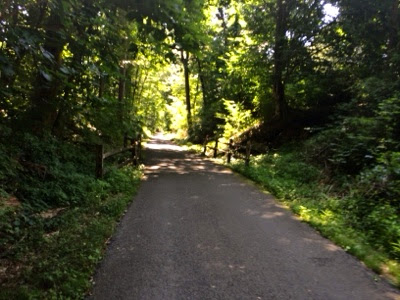 When I got home wifey was finishing up cooking a few meals to take with us on our 10 day lake vacation. 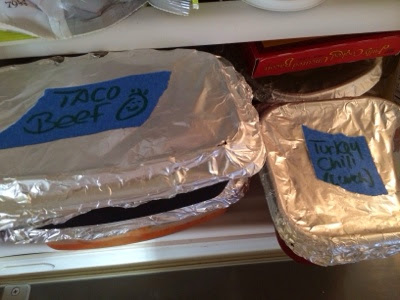 We leave on Wednesday!
So pretty much all morning & early afternoon the king was home and we were busy so we left him “alone” to do whatever he pleased.
I put alone in quotes because you never really leave a severely autistic and severely epileptic kid alone for more than two minutes at a time.
But we let him do his own thing for the early part of the day which consisted of watching lots TV on the TV and on the iPad, eating some snacks holding his breath and meandering around the house.
At about 3pm we started to pack for a late afternoon trip to the beach.  The ocean. We made plans to meet an old friend & her hubby & her son at a beach near their house on Long Island.
We are used to NJ shore beaches where you park and the beach is right there. So wifey asked if that’s the way this beach is. Cuz asking Kyle and Paula to walk a long way to the beach can be a recipe for disaster.
Our friend said it was.
So we trekked thru the typical weekend Long Island traffic and made it out to their beach at about 5:30pm.
The parking lot was HUGE and still really packed considering how late it was.
We find a handicap spot near the entrance and see that the sand is right there, but it’s probably a 3/4 mile hike to get to the water.
Ugh. After driving thru traffic for 90 minutes I was ready to throw in the towel. But wifey flagged down a beach patrol guy driving a golf cart type thing and asked him a few questions.
And the next thing I know he is driving us in his buggy to our friends spot on the beach.
We went 2 at at time. Kyle and I went first. He had a great time bouching thru the sand in the buggy! 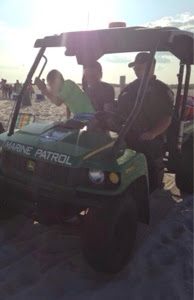 Then wifey and doggie Paula came on the second “transport”.
The patrolman, Tony, even gave us his cell phone number so we could call him for a ride back to our car!
By the time Kyle first put his feet in the ocean it was 5:45pm. And the waves were rough!  He absolutely LOVED IT!  He got his ass kicked by a few HUGE waves!  But always came up laughing and smiling and running in for more!
I said to wifey “he’s 11 and he’s totally riding the waves!  that’s totally age appropriate. that’s how I looked at his age”
He had a great time in the water 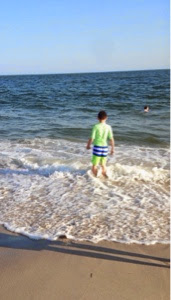 and had a great time on the sand. 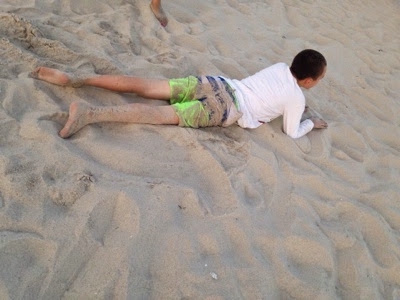 By about 7:30pm it was windy and it started to get a little darker so it seemed like time to make a move. So at 7:45pm I called tony to come get us and by 8:15pm we were back in the car and back in the road home.
We hit even more traffic on the way home and we didn’t make it home til almost 10pm.
On paper driving for 3 and a half hours to spend 2 hours on the beach makes no sense. And normally I’d be grumbling a bit about that on the way home. But because he had such an amazing time then I had an amazing time and I barely noticed the traffic.
😉
When we got home wifey gave him a shower. He had sand in every crevice. (way too much sand to clean him up properly before we left the beach).
Wifey said after the shower Kyle planted a kiss on her cheek. That’s not something he normally does. Wifey almost melted.
15 minutes later and he was asleep and wifey and I ate some snacks and watched old episodes of “Scrubs” on Netflix until we both fell asleep on the couch.
And that was the end of our perfect Saturday.

16 People Replies to “Tales of a Perfect Summer Saturday w/pics!”