An Audio Blog From Autism Daddy — a recap of the king's bd weekend & more...

Autism Better, Epilepsy Worse? An update about my son…

It sometimes takes me a few hours to write a blog post.  I’ll start it and then put it away for a few hours when life takes over and pick it up later when things calm down.

Anyway, I’m starting to write this post on Saturday afternoon at 5:08pm.  Kyle has been asleep on the living room couch for about 90 minutes already. 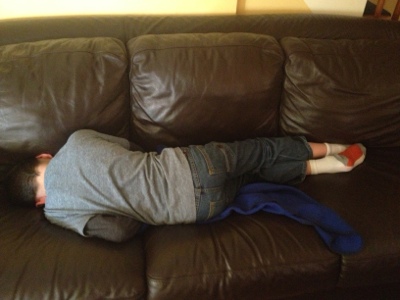 He had a couple of nice size seizures today, the kind that make him nap afterwards, so that is why he is sleeping.

People always ask “what kind of seizures does kyle have?”  “does he have grand mal seizures”

It will be a year in late May since we took the Epilepsy Expressway to Seizure Street and I’m still not sure exactly what kind of seizures Kyle has.

I know the big ones where his eyes are open and pupils either rolled back or to the side are the “complex partial seizures”.  These last in the 15-45 second range.   And back in the fall of 2012 he was having “drop seizures” also known as “atonic seizure” where he would lose his balance for a second and DROP, usually backwards.

And he also has silent seizures also known as absence seizures which are hard to identify because they look like he is staring off into space for a few seconds…but he does that all the time cuz he’s autistic 🙂 lol…  but we think we are better at noticing them lately…he gets a goofy grin and does some weird movement with his thumbs when having a silent seizures.

Anyway, we haven’t seen those drop seizures in awhile, but we are still seeing the silent seizures and more recently a return of the bigger complex partial seizures.  The ones big enough to make him nap.

Basically Kyle has a form of epilepsy called Lennox-Gastaut Syndrome.  Here’s the Wikipedia definition of this syndrome.

Lennox–Gastaut syndrome (LGS), also known as Lennox syndrome, is a difficult-to-treat form of childhood-onset epilepsy that most often appears between the second and sixth year of life, and is characterized by frequent seizures and different seizure types; it is often accompanied by developmental delay and psychological and behavioral problems.

Basically it is a severe type of epilepsy that is difficult to treat with medication.   Oooh lucky us!

Kyle is currently on the meds Depakote & Onfi and the seizures that he is having lately are “breaking through” the medication.  We saw our neurologist a few weeks back and she may be changing his meds again soon, but first we are going to do a 24 hour at home “video EEG” to get a better look at the types of seizure activity he’s having. That is scheduled for later this month and should be a torturous 24 hours for all 3 of us.

The neurologist also told us to start googling VNS Surgery because this may be in our future if his seizures continue to be resistant to medication.  Basically he’ll go on every antiseiure med until we find one that works to make him almost seizure free.  And if we don’t ever find that med, which is common with people with Lennox-Gastaut syndrome, the surgery may come into play.

VNS stands for Vagus Nerve Stimulation and is a “minor” surgery where they implant a pacemaker type device inside your chest and they wrap an electrode around a nerve.

It works with magnets, is not considered a serious surgery, does not involve operating on or near the brain, and helps lots of people with Kyle’s type of epilepsy.

You can read all about the VNS Surgery HERE

So all this seizure & surgery stuff sounds extremely scary and we must be completely stressed & freaking out, right?

I mean when the big seizures happen we get stressed and the days leading up to the EEG will be stressful. And if we ever have to do the surgery, maybe a year or two down the road, we will completely freak out…but the day to day management of all this stuff has been pretty easy.

2) Since December / January he’s been awesome behaviorally and seems to be making the most significant progress in years. It’s like his epilepsy is getting worse and his autism is getting better. The past few weeks especially we’ve seen a TON of really positive things.

He’s just more aware of his surroundings and has stronger opinions and tries to get his point across and let you know his wants and needs instead of just blindly going with the flow.

At home he’s been taking us by the hand and leading us to what he wants. Leads me to the tv, leads wife to the kitchen, leads me to the staircase when he wants to go to sleep.

He’s totally more aware of his surroundings. We went to this big kid friendly supermarket today and he headed right to the ice cream stand, knew exactly where it was. And he wanted ice cream and let us know.

At the playground last week I guess he had enough and he wanted to leave cuz he spotted our minivan about 1/4 mile away across this huge grass field and walked straight to it…with purpose.

He’s kinda using the signs for hungry & thirsty when he’s actually hungry & thirsty. In the supermarket today wifey put a bag of pretzels in the cart and he grabbed them and handed it to her and touched his chin. He got his point across.

There’s tons of other examples that I can’t think of right now but it seems like he’s going thru a wee bit of an awakening.

A few of you have hinted that his brain might get a bit rejiggered and progress could come with puberty. Maybe this is from that? He’ll be turning 10 years old next week.

We don’t know what’s causing the progress but what we like what we are seeing.

Now let me take a step back and say that it’s not all great & sunshine & rainbows around here by any means. I forgot to mention that due to the seizures or the meds or growth spurt/ puberty (?) he sleeps a lot, and gets tired quick.  He sometimes sleeps 12 hours straight from like 7pm – 7am which we don’t always love.  Sometimes it feels like he’s sleeping his life away….and we have to back up his plans & activities to fit everything in before he begins to get tired & ornery by 6pm .

And he still holds his breath constantly. I need to write a post about the breath holding. It’s been going on for almost 3 years now. But it’s definitely getting worse and getting in his way. There’s sometimes when he’s so concentrated on holding his breath that he can barely do anything else. Sometimes he can’t walk from the car to the house cuz his breath holding is getting in the way / consuming him. And I think sometimes the breath holding might help trigger some of the seizures and/ or dizziness.

So we’ve still got TONS of behavior issues to deal with.

He has a few stretches each day where he’s really related and is so happy to be sitting in his nook reading books or on the couch watching tv or eating like a big boy at the table or eating popcorn in the minivan or swimming in the indoor pool.  And during these stretches he is awesome and affectionate and sometimes verbal.  We hear a lot more sounds & vocalizations from him lately, lots of “lo lo lo lo lo lo”  🙂

So the wife and I are just living for these stretches of the day. They help fuel us and help us get thru the seizures and meds and breath holding craziness.

And so far the wife & I are still staying pretty even keeled and handling all this better than we probably should be. Perfect example he had a seizure at that supermarket today and we very calmly put him in the cart and wheeled him out of the store. He was already fast asleep in the cart as we made it outside. It barely phased us.

It is now 8:26pm. The king got up from his seizure induced nap completely happy around 6pm. Had one of those nice stretches I was talking about. Had a big dinner. Had his evening meds. And is now watching Dora while holding his breath like a maniac and pushing his fist against his neck and kinda staring into space a little. It’s starting to drive me crazy.  Did I mention that sometimes when he holds his breath that he also pushes his fist hard against his neck, pretty much against his jugular?  Oh yeah, add that into the mix.  Tons of fun?  He must get quite a high that way…but again it gets in his way and drives me crazy….So now I have to make the decision do I give him melatonin even though he took a 2 hour nap today?

Wow what a long rambling blog post! It is now Sunday at 4:18am and I’m finally done writing this mess.
I didn’t give him melatonin before.  He fell asleep around 9pm and then woke up happy laughing at 3:30am and we are now back in the living
room watching Dora again and eating cheerios….

The main takeaway here is it just seems like his epilepsy is getting worse and his autism is getting better.

19 People Replies to “Autism Better, Epilepsy Worse? An update about my son…”