Now Reading: A ROUGH Memorial Day With A FREE Meal Thanks To Autism :)

A ROUGH Memorial Day With A FREE Meal Thanks To Autism :)

It’s 8:41pm on Monday night and I can hear the neighbors behind my house still partying & enjoying their Memorial Day BBQ.  But, me, I’m sitting in the dark in Kyle’s bedroom thrilled that I got him to sleep already so the wife and I can watch tv and relax.

It’s been a long, extremely rough, crazy, and exhausting Memorial Day…  with a little guilt thrown in.

I’ll get to the guilt first…  I feel guilty complaining about Kyle’s bad behaviors because we he has a day or two filled with big seizures and long naps that often follow big seizures wifey and I often wish for & long for things to get back to “normal”.

But then we have a day like today and I was BEGGING for a nap…which makes me feel guilty…  I was obviously not wishing a seizure of course… but a good old fashioned nap would’ve made the day a bit more manageable / broken the day up a bit.

So why was the day so torturous?

Kyle was just out of sorts all day and acting like a big old jerk.
I didn’t say he was a jerk but his behavior today was just jerky.  A big old jerk.  I know…maybe he couldn’t help it…maybe something was bothering him and he couldn’t tell us…but all in all it was still jerky behavior… I’m allowed to say that damn it!  LOL
So here’s how it all went down…Wifey wanted to get out and get an early start today. So we went out to breakfast at 9:30am.
She wanted a brunch-y type place so went to this kinda fancy place that we’ve been to before on date nights without the king. It’s in kind of an affluent area.
But it was brunch-y. It had outdoor seating and the weather was beautiful.
Well we spread more awareness today than we have in a LONG time.
Kyle was just awful in the restaurant. Just really bad behavior. So while we were waiting for our food I broke out some popcorn to hold him over.
The popcorn finally mellowed him out. In fact he got so mellow and relaxed munching away on popcorn and reading his book that he peed right there in his seat.
Thank god we were sitting outside and the seats were metal and had holes in them…but regardless there was a man size puddle underneath his seat.
My wife and I just FROZE. That hasn’t happened in a restaurant in a few years. We almost forgot what to do. And then it all came back to me.
ME:  “Does he have extra clothes in the minivan?”
WIFEY:  “Yep”
ME: “I got this.”
So I brought my 5 foot tall, 11 year old son out to the parking lot, wrapped a towel around him and redressed him in whatever I could find. He had an appropriate pair of pants in there but no underwear. So I put him in a bathing suit, a pair of pants, a new pair of socks and put the slightly urine soaked sneakers back on him and back in we went.
While I was gone wifey had to decide whether to tell them. She did and they cleaned the puddle and his chair as best as they could. Again thank god we were sitting outside.
And we tried to return to our breakfast. I honestly thought that once his food arrived he would rally and enjoy the food and we would all get thru the meal.
But he just didn’t want to be there. Didn’t want to eat their delicious chocolate chip pancakes and bacon. So he made it be known by being non verbally verbally loud. And by starting to throw his books.
Around this time, the hostess / owner (?) came over with a post it note and said the woman who was sitting next to us who just left paid for our meal and left this note. 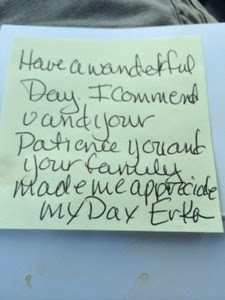 Yep that happened. The note reads…”Have a wonderful day.  I commend u and your patience.  You and your family made me appreciate my day.  Erka”
And wifey almost starting crying. She said “it’s almost easier when people are a–holes, but when they’re really nice like that it gets to me”
And I don’t want this post to get derailed by any negativity about what what the note says.  I’m fine with what she wrote.

I also don’t think a nice gesture like this needs to “go viral” and be shared around the world.

Basically a lady did a nice thing and that’s it.  She paid for a meal of the people sitting next to her who were having a rough day. Plain & simple.   And we appreciated it.
Anyway…
After that we took turns. Wifey took the king to the car while I scarfed down my breakfast in peace. And then I took over and she finished her breakfast. And she left them a HUGE tip.
Once we were all back in the car Kyle happily munched on popcorn and watched his sesame DVD without a care in the world. And the wife and I weren’t crazy upset or angry we were more like shell shocked.
ME:  “It’ll be a long time before we go back to that place.”
HER:  “yeah we’ll definitely leave it for a you & me date night place from now on.”
ME:  “although we could make a habit of this. go to fancy restaurants in affluent areas and send Kyle in with a full bladder and get a free meal out of it.”
And we both burst out laughing.
After that we went to a waterfront park near there to let Kyle look at the water cuz he likes that. And that was ok and enjoyable for a very short while

until it wasn’t anymore…  🙁

And then we went to Trader Joe’s supermarket. And I gave Kyle the choice of staying in the car with me and watching his videos and mommy shops or we all go in… and he tried to open the car door so to me that meant he wanted to go in.
And he was ok in the store for a few minutes. He saw Veggie Chips on the shelf there and indicated that he wanted them (which was great). So I handed him one at a time as we shopped.
Then, in his mind, he was done eating veggie chips & food shopping. And he indicated this by hitting me. So he and I quickly went out to the car (me gently holding him by the wrists as we exited so he wouldn’t swing at a stranger) while wifey finished up shopping.As i sat in the driver’s seat in the minivan getting hit in the shoulder by the king a few times I looked at the clock and it was only 1:08pm and I couldn’t f–king believe it.  This day wasn’t even close to being over…
And then we went home. It was probably only about 1:30pm when we got home. And it was obvious that neither one of us wanted to hang out with Kyle.
Wifey excused herself to “do laundry” and a half hour later i left to clean out and vacuum out the minivan and to go to home depot to get a hose winder upper thingie for the backyard.
I’m not a handy guy and I actually hate Home Depot so the fact that I went there just shows how much I wanted out of our crazy house.
As I was leaving Home Depot after about 45 minutes of browsing / stalling / taking my sweet ass time wifey and I had the following text exchange.

After I got home we all went in the backyard so I could put together and install the hose winder upper thingie.
And back there he was holding his breath like a madman while occasionally taking his pecker out all while the neighbors behind us were having a Memorial Day BBQ.
So basically the whole day was torturous…all the way until he fell asleep at around 8:20pm.
And after a 4 day weekend for me I am exhausted. And I can’t wait to get back to work.
And Kyle had a 4 day weekend and probably can’t wait to get back to school and get away from his jerky parents.
And I’m sure wifey is looking forward to tomorrow to get rid of both of us.
Anyway, I think I’m done with this post.  I think it’s time to go inside and watch tv with the wifey…
And as I’m writing all this down it doesn’t seem all that bad and I’m probably coming off as a big selfish jerk…but what can i say…I guess after my 11 year old peed his pants at a restaurant and someone paid our bill out of pity the whole day was downhill from there for me…:-)

Anyway, hope you all had a better day!

46 People Replies to “A ROUGH Memorial Day With A FREE Meal Thanks To Autism :)”