Now Reading: When Should We Stand Pat?

Defending Why I Call My Son the King -- VIDEO

"Why is My Kid the ONLY Special Needs Kid Behaving Like This?"

When Should We Stand Pat? 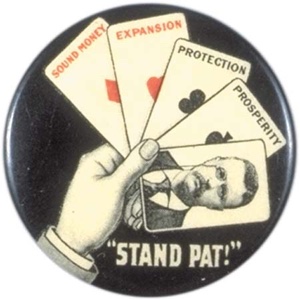 So last week I wrote how I don’t believe in jinxes and how the king was going thru a great stretch behaviorally.

Wifey & I went to the Halloween party in his class on Friday and I got a lot of face time with his teacher and she said that although he usually still has a rough patch each day, the king was doing much better behaviorally.
Then after that, he had a pretty great Halloween weekend.
So great that I said to wifey, “when is the next neurologist appointment?  i don’t think we should change any meds at the next appointment.  i think we should stand pat for a change, and just leave things where they are.”
As many of you know the king has
epilepsy in addition to autism, and goes thru phases where he has small seizures daily, and in early September he went for his now annual overnight EEG, and that was followed by a med adjustment.
We started a new med, and went down on an old med.  And the thinking was at the next appointment, depending on where his seizure activity is at, we would probably be going up more on that new med, and coming completely off the old med.
But what are the most common side effects of all these meds when it comes to his majesty?  Sleepiness & aggression.
So in the few weeks after the EEG we had a kid who was sleeping A LOT and had quite a bit of aggressive behavior at school.
But fast forward about 5 weeks and last Friday after visiting his school I was looking at things and found myself thinking thoughts like this…

“He’s doing pretty darn well!   I didn’t even notice it, but he’s been doing pretty great for a few weeks now!  He’s still sleeping more than we’d like, but not an obscene amount, and when he is awake, he is a pleasure to be with.  Plus the school has never seen any seizure activity and we haven’t seen any in a few weeks as well.  Maybe this formula of meds is the way to go for awhile.  Maybe we should stand pat.”

So,of course, like clockwork he had a nice size seizure Friday evening during a nap, and another one Saturday morning in his sleep.  His first bigger seizures in almost a month.  Both seizures lasted about 40 seconds.
But the rest of Saturday & Sunday, no more seizures, and again he was a pleasure to be with.  Just chilling, happy, going with the flow.
And here’s the weird thing about the place we are right now with the king’s epilepsy.  The doctor’s goals are always to work towards absolutely no seizures, and of course that is our goal too.  But when he’s having a great stretch behaviorally I still find myself thinking:

“Ok, he still had 2 seizures but I think we should still not change anything with his meds.  I don’t want to rock the boat with his behaviors.“

So, of course, like clockwork, Monday, yesterday, the king goes to school and the teacher reported that he had a really, really rough day behaviorally.  Then I get home from work at 6:30pm yesterday and wifey reported that he’s been sleeping since 4pm.
Then today he is off from school for Election Day and wifey is reporting to me via text that he’s been napping on & off all day.
So bad behaviors at school are back, check, and he’s napping an obscene amount, check.
So now what do we do?  I know it’s only two days, but I know his majesty, and this is his MO.
So, do we stand pat?  Or tweak meds?
It always feels like around the holidays every year either the king is a terror behaviorally for one reason or another, or we are changing some meds or protocol, or doing something new, and he’s not himself because of it.
And my gut tells me this holiday season will be no different.
Well I guess we will be standing pat at least until the neurologist appointment which is mid-November I believe, and then we will see what he has to say.
And in case you don’t know much about epilepsy and the treatment for it, it’s just as much a crap shoot as autism is.
Depending on the types of seizures you are having & what side of the brain they are coming from they’ll try you on this med for awhile, and if that doesnt work, then they’ll switch you to this med, repeat, repeat, repeat.
That’s it.  That’s all I got.  This epilepsy really sucks, and it makes you have these weird thoughts and have these weird tradeoffs in your head.
That’s it.  Over & out!
THE END!
————————–amzn_assoc_ad_type = “responsive_search_widget”;
amzn_assoc_tracking_id = “a050ef-20”;
amzn_assoc_link_id = “VQ4HMJ4XYMYMZ2PG”;
amzn_assoc_marketplace = “amazon”;
amzn_assoc_region = “US”;
amzn_assoc_placement = “”;
amzn_assoc_search_type = “search_widget”;
amzn_assoc_width = 300;
amzn_assoc_height = 250;
amzn_assoc_default_search_category = “”;
amzn_assoc_default_search_key = “”;
amzn_assoc_theme = “light”;
amzn_assoc_bg_color = “FFFFFF”;

8 People Replies to “When Should We Stand Pat?”