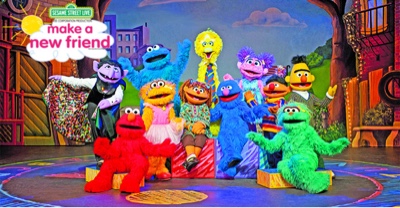 So now that you all know that I work at Sesame Street I can tell you about one of the many perks of the job. When the “Sesame Street Live” show comes into town I can call in a friend to get free tix for the 3 of us.

If you don’t know what “Sesame Street Live” is… It’s a live show that tours the country with big “walk around” versions of all the Sesame Muppet characters. And they sing and dance and teach.
Think “Disney on Ice” minus the ice.
And we have taken his majesty to a Sesame Street Live show every October since the king was about 17 months old. Every October since 2004.
This past Saturday we went. It was our 12th year in a row.
And the king had a real nice time…better than last year, but that’s not the point of this post.
The point of this post is that because we’ve been doing this once a year for 12 years I can literally track the king’s autism and his progress (or lack thereof) and my progress in dealing with it across those years.
This all dawned on me this past Saturday while I watched the 2 and 3 year olds dance next to my 12 year old as he really enjoyed the show.  The fact that he paid attention to the show was huge progress for the king compared to years back and the fact that I could watch the typical toddlers dancing and clapping and not feel a pang of jealousy was huge progress for me.
That’s the point of this post.
Anyway so here’s a real rough, basic breakdown of how the king was and how I was across all these showing of SS Live over the years:
OCTOBER 2004 — The “he’s not as easy to handle as the other kids year” — Pre diagnosis. The king is 17 months old and I remember noticing some differences. All the other kids are dancing in the aisle and enthralled with what’s going on over on the stage while my kid just wants to look at the lights and the ceiling fans and is almost oblivious to what’s going on around him. Plus it’s literally  impossible to get him to sit still in his seat for even 30 seconds. I remember thinking:  “What are these parents doing that we’re not doing?  How are they getting their kids to sit?  And follow directions?…”

OCTOBER 2005 — The “post diagnosis” year — By this the king was almost 2 and a half and we had a pdd-nos diagnosis and had therapists coming in and out of our house for months. I went to that year’s SS Live show noticing the differences between my kid and the other kids his age, but “maybe he didn’t stand out as much compared to last year?” I thought…i believe I was  somewhat hopeful because he was making some nice progress with his therapies.

OCTOBER 2006 thru 2009 — the “he’s autistic but doesn’t stick out yet years” — The dog days of autism. In these years from when the king was 3 and a half thru 6 and a half is when he went from mild pdd-nos making some decent progress to the severe, flappy, classically autistic kid that you all know and love today.  🙂
We were on the GFCF diet for one of those years, maybe two.  So, while all the other kids pestered their parents for hot dogs and ice cream i remember that we had a bunch of the king’s crappy and expensive GFCF snacks with us. It felt like the king still barely enjoyed the show back then and still couldn’t sit in a seat for long stretches, but that’s something that probably only I noticed. He still was small so he didn’t stick out among the other toddler SESAME fans. Lots of naps during the show, a few meltdowns during these years. It was during these years during a particularly rough show where I first had the thought “why do we put ourselves thru this every October?”
OCTOBER 2010 thru OCTOBER 2011 — The “Paula years” and the “is he getting to old for this” years. So we got our autism service dog Paula in May 2010 so in October of that year we brought her to the SS Live show. Now at 7 and a half he was definitely getting to be one of the biggest /oldest guys at the show so that made him stand out. Add in that he was tethered to a dog and he really stood out.
As much as we love having a service dog the dirty little secret is how hard it can be in public places when All Eyes Are On You & Your Family. And SS Live was one of those places. Kids just lose their minds, understandably so, when they see a dog in a public place. So as we went to and from our seats it was as if we were rock stars…everybody notices us.
Again this was my issue.
The king seemed un-phased by this and Paula did her job beautifully over these years. So much so that his majesty sat in his seat for almost the whole show across these two years and really seemed to start to pay attention to what was happening on the stage… So huge progress there with both his sitting and attending!  I just needed to get over my issues with all the staring.

OCTOBER 2012 & OCTOBER 2013
The “epilepsy years”. So the king started having seizures in May 2012 so these two years at the SS Live show we were now worried about seizures in addition to autism. And I was now wondering if the flashing lights from the show would bring on seizures. He had a small / mild seizure during the show in one of those years. And the 2nd year he was wearing a cast boot on his right leg for a mysterious limp. So he was happily hobbling around. So that second year I was worried about seizures and the limp. And meanwhile the king had a great time as the biggest baddest 10 and a half year old at the show.
OCTOBER 2014 & OCTOBER 2015 — The “status quo years” or the “acceptance years“. Yeah the king is 11 – 12 years old. Yeah he’s at a Sesame Street Live show. You gotta problem with that?
But seriously these past 2 years have been much easier for me. Nothing phases me any more. Yep he might have seizures during the show. Yep he will probably be the oldest kid in the place. Yep we still bring in a bag full of his snacks (just non- GFCF snacks).  Yep he might not be able to sit still the whole time. (last year we had to move our seats to the back cuz something was bothering him).
But none of this phases me any more. I’m fine with it all now. Mostly I’m fine with it because it’s so obvious now that the king is enjoying the show…Yes the actual show that’s going on on the stage. Maybe I’ve finally reached a place where seeing the typical toddler kids doesn’t bother me as much any more. All I know is I was looking forward to going the last 2 years and I looked back on it fondly after it was over these past 2 years and didn’t need a nap after the show these past 2 years.
That’s all huge progress for me!
Anyway that takes us up to the present. Who knows what the next 12 years will bring. Will we take the 24 year old king to the show? I don’t see why not. And I’m sure that’ll come  own unique challenges.
But that’s for the sequel to this post.
Look for “Part 2” in about 12 years.
🙂
PS I’m curious if you all have something that is the equivalent of this. Some event or thing that you do with your special needs kid once a year and because of that you can really track progress by looking at it closely.  Let me know in the comments…
THE END