Some Typical Moments During a Tuesday Dinner

Sun afternoon — So the king & I went to Costco this afternoon. I know what you’re thinking “Costco on a Sunday afternoon with an autistic kid, you’re crazy!”
And to that I say, yes I am crazy sometimes I like to tempt fate and enter Costco on a weekend afternoon or as I like to call it…”the belly of the beast”
Anyway Kyle was having a good day so far and I was on my own with him today since the wife was visiting some old college friends.
Sometimes being out, anywhere is better than being home for
Kyle. Or maybe it’s better for me…yeah it’s probably better for me…
but regardless we had been out since 12:30pm.
He had his swim lesson at the Y…
See a better quality version of this video over on FB athttp://
on.fb.me/1aC1aoo http://on.fb.me/1aC1aoo
Then he had a nice hot shower after swim and then he had a nice lunch in the cafeteria at the Y….
After all that it was only 2:30pm. He doesn’t got to bed til around 8:30pm. I figured we’ve got 6 hours to kill and I need stuff at Costco.
So we went and he did great!
Helped push the cart a little but mainly wanted to stand on the front (back?) of the cart, and wedge himself between me and the cart and hold on, and lean against me. It was sorta like a fun ride for him. So we did that between each stop.
He’d get on, id push him to the Gatorade and then he’d get off so I could load the cart then he’s jump back on an we’d move on to the next aisle, next stop.
Check out he had to get off the ride and wait…but he was extremely happy and stimmy. 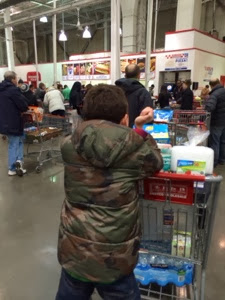 And I should’ve figured out why…
Seconds after I took that pic…he peed himself right there on the costco line.
Somehow he didn’t get his pants wet but there was a little puddle beneath him.
And I couldn’t get mad or even disappointed cuz it was totally my fault.
We got him back on track with the potty training a few weeks back and we put him back in big boy underwear but I still need to take him at the beginning and ending of every stop.
I took him before and after swim, I took him before and after lunch, but i forgot to take him before a long jaunt around a huge store…and he made me pay for it.
But while in the past i would’ve gotten really annoyed or embarrassed and left my cart and abandoned ship altogether.
This time we calmly continued waiting on line, and calmly paid for our stuff.
I think the fact that his pants weren’t noticeably wet and the fact that he was still happy and flappy made it easier for me to keep my cool.
I told the cashier that my son spilled some apple juice on the floor back there. The girl packing the cart seemed like she understood who Kyle was and was very sweet and offered him a candy bar and kept an eye on him while I signed the credit card pad.
And we headed home.
And then he took a nice long bath which he loves. 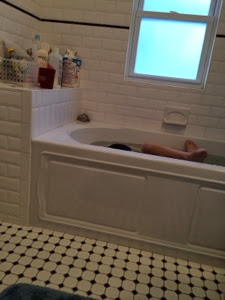 The bath almost makes it feel like he’s being rewarded for peeing his pants. But again, that was my fault, not his.
It’s now 5:02pm and now we’re sitting on the couch together watching Sesame and celebrating National Popcorn Day by splitting a bag of yummy kettle corn.
That’s it, that’s our afternoon so far.
Hope y’all enjoyed it…
Over and out.