My Page Is Too Happy You Say? Well Let Me Tell You Some Excruciating Stuff aka My Kryptonite

Sometimes progress isn’t measured from one week to the next. And sometimes it’s not even noticed or appreciated for years.

I find myself noticing progress and how far the king has come when I see a toy or an item from Kyle’s old days.
That’s what happened here…
A few weeks ago Kyle was playing in his playroom and wifey opened the closet in there to get something.
The king’s eyes
lit up when he saw a bunch of his old toys in there.
Wifey purposefully takes toys in & out of rotation so when he gets satiated with one there’s an oldie but goody ready to take its place.
So anyway she opened the closet and he noticed right away and his eyes lit up.
Even that is progress from years back. This might sound weird but years back he’d be obliviousness to even noticing the closet being open or noticing his fav toys in it.
So the fact that he took an interest and parked his butt right outside the open closet door and started grabbing toys is a bit of progress.
He noticed this one toy that he used to love. 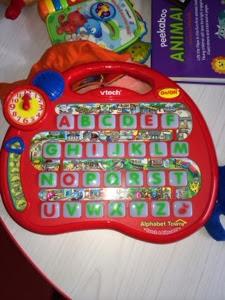 He never ever played with it appropriately. He would just turn it on & off and touch all the buttons…for hours…
🙂
Anyway he gravitated towards it, but alas it was broken…probably from one to many throws across the room by his majesty over the years.
I changed the batteries and yep it was definitely broken.
But Kyle kept handing it to me & wifey as if to say “turn it on, dude. make it work!”
(which is something he never would have done years ago)
So wifey asked if I could find it online. I searched amazon and they don’t make it anymore but I found it used on eBay.
And for $20 including shipping it was at my house 4 days later.
I know what some of you are thinking. “$20 for a used toy that probably cost $20 when it was new 8 years ago?!  Are you crazy…or rich?!”
And the answer is… No. I’m usually a cheapskate. And it hurt me to spend $20 on a used toy, but wifey’s always saying “family give him money for Christmas and his birthday cuz they don’t know what to get him…this toy is exactly what that money is for!”
And I hate it when she’s right…(which is more often than I like to admit)…but in this case she was right…
So 4 days later this toy arrives. I add new batteries and it works and the king was thrilled.
But as with many things with Kyle he gets overly obsessed with it…so we have to take it away…
And like the old days id take it away and put it up high on top of our “hutch” 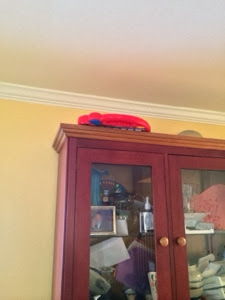 But in the old days he wouldn’t notice where I “hid” things. It was literally out of sight, out of mind back in the old days.
But now he noted where I put it. 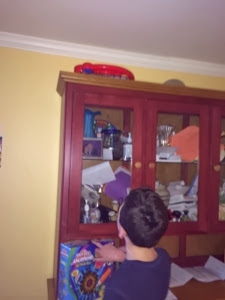 And now when he wants it. He’ll take our hand and bring us to the hutch to get it for him.
Or he’ll try to get it himself.
And he’s getting so tall that a few more inches and he can jump and reach it himself! 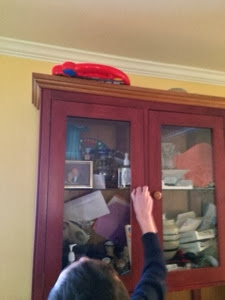 Progress & growth!
That’s about it folks. He still doesn’t play with it appropriately at all. He still throws it across the room. (I should’ve bought 2!). But he knows what he wants. He knows where we hide it. And he knows how to ask for it.
Progress & growth!
The only new problem that we didn’t have to worry about years ago?
Look at what this toy does…
Hope all those fast blinking & flashing lights don’t induce seizures in epilepsy boy. We didn’t have to worry about that years back.
Oh well. I guess like with most things related to autism one could say that the seizure worry is a case of 3 steps forward & 2 steps back…but by my calculations that means that he’s still 1 step ahead!
3-2=1
Progress & growth!
The end